I love technology. More than most and less than some, I'm always looking for new ideas on how to incorporate it into the classroom. But I admit defeat when trying to manage some technology and how students use it. So what has flummoxed me in the past? What piece of technology has me gnashing my teeth? The cell phone. This tiny instrument has caused me and many teachers I know nothing but angst. Between parents texting their kids just because to work supervisors texting to see if teens can leave school so they can cover someone else's shift (yes, this happens weekly at my school), the cell phone and I are developing a love/hate relationship. 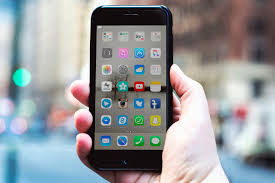 In the past kids have used their phones to listen to music (remember, my school is an alternative one), occasionally look things up and this year, they'll be using them to check out books from my library. Useful ways to use a cell phone as an instrument. However, they also use phones to Snapchat, Instagram, text each other, text parents and other family members and so on.
What's the solution? As much as I hate to admit defeat, I am. So to bring things more under control this year, I'm going to institute a cell phone policy. It's not all worked out yet as I've turned to some people for help in figuring this out. Obviously, I'm not engaging my kids all the time. So there's that to work on. But I think it goes beyond that. I truly believe some people are addicted to their cell phones which makes it hard for them to disengage from the device.
The students probably aren't going to like it. I'm not going to like it. But it is what it is. I'd be interested to know what others do to stem this growing tidal wave of use. Cell phones are great tools, but they can also be
negative . I don't have the answers....do you? Share it with me...it could make all the difference.
Posted by Eileen Zygarlicke at 12:26 PM 155 comments:

Lessons Learned from a 7th Grader


My grumpy me got schooled by a seventh grader recently. For me, it's been a long summer. It wasn't the "vacation" I had envisioned and the lack of action had me feeling pretty ornery. To accomplish something around my house, I hired a seventh grade girl, I'll call her April. So April arrived, Grumpy Me was alive and well, and I told her what needed to be done. I almost used the word "instructed" just now--I "instructed" April what to do. But I didn't, instruct her I mean.And here is where she schooled me.
April probably thought I was the worst person around. And she would've been right. I realized as she toiled away that she was doing what she thought I wanted her to do. I assumed she knew what she was doing even though I had never told her anything, really. It reminded me of the classroom. How many times do we fail to give explicit instructions, or actually teach the kids anything, and then expect them to know what we want them to do? They'll be like April, tentatively approaching the work without any real direction trying to bring a sense of order to the task at hand.
The question is do we just assign tasks or do we actually teach what we want our students to do? Do we hand them a work sheet and tell them to do it, or do we engage them in the lesson and make it meaningful for them?
I hired April again a few days later to help in my classroom. I made sure Grumpy Me was locked up tight. Not only did the day go better for me, but I know it went better for April. I treated her the way I would want to be treated had I been her. We talked and laughed and had a good time. We got the project done in my room because I did a bit of instructing first to lay out the plan. And things went smoothly.
So what were the lessons learned?
April worked hard and did a terrific job. Me, however? Yeah, I'm still a work in progress, but I'm glad I'm learning new lessons. That can make all the difference.