Ever wonder how a salmon feels swimming against the current, trying with all its might to return to home base? Sometimes I think teaching is like that--when you try new things in your classroom, that is. I mean, really, how much effort does it take to do the same old, same old? Be like a salmon, and swim upstream.
I'm in salmon mode right now. My students are working on a project that I don't feel like I have a handle on. Every day something new comes up and problem-solving occurs. I know it's okay to feel a lack of control, but everything inside me cries out to step in and take charge. 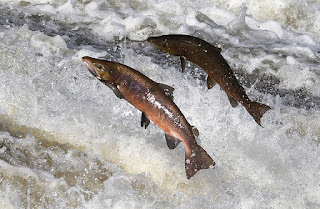 How is this new idea working out? I'm not really sure. Is it what I envisioned this summer when the idea was born as I sat at Starbucks with a colleague imagining the possibilities? Not in the least. Yet I think it's working. Just because I feel out of whack, doesn't mean things aren't progressing. It's a lesson I have to learn and sometimes relearn--how to give up control and let the students be in charge. It's so much easier and efficient for me to step in, but would that allow students to learn as effectively?
I don't want to be the only one swimming upstream in the classroom. I want students to feel a bit uncomfortable, maybe a bit off kilter, because they aren't being told what to do. They decide. They take charge. They figure things out.
It's easy to see why teachers don't embrace projects and project-based learning in the classroom. We're control freaks. And giving up that control is not easy. But challenge yourself. Be a salmon and swim against the current. It could make all the difference.
Posted by Eileen Zygarlicke at 5:42 AM