I am a list maker. Who doesn't love making lists and then feeling a swell of satisfaction as you swipe a pen mark through it, crossing it off the "to do" paper which haunts your dreams. Well, it spooks my dreams, at least.
So in an effort to organize myself and my life, professional, private, and spiritual, I asked for and received for Christmas a throw-back gift. Something many may scoff at but an item I've come to realize I need in order to remain organized and in charge of my life.
Over Christmas, my husband and I watched "27 Dresses." The main character, Jane, is always "doing" for others that she neglects her self. To keep track of everyone and all her events (usually wedding related since she's been in 27 weddings), Jane utilizes a planner, a fat three-ring 5 x7" binder with calendars, a notes section and more.
Many scoffed at her outdated mode of staying connected. But not me. Although I didn't ask for a day planner like that, I did receive my own appointment book and life-managing planner. Perfect size. Perfect gift. My husband was completely befuddled. 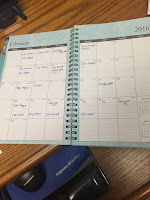 Why? Because I am a techie. I love technology and Google calendar. I love getting the little reminders about upcoming events (like the one I just received about my date for coffee with a friend). What I don't love about this particular use of technology is that it's so small and limits me in easily seeing multiple months at a time. By using the planner, my dates are there, my calendar's there, and all it takes is a moment to insert new events.
I'm not one to miss appointments, but I know having this calendar in hand will make it more likely I'll not over commit to multiple events on a day.
Since my goal this year is to improve my organization skills, and get and stay organized, I thought this little book, small enough to slip into my purse, will help me do just that.
What's on your to-do list? What's coming up in your life? How organized are you? This little planner helps me plan my life, be a more efficient teacher and more available mom and wife. Seems simple and old school, but for me? I think it will make all the difference.

Posted by Eileen Zygarlicke at 6:48 AM No comments:

I know it's Christmas but my mind is mired in April. April 9th to be exact. The date of our inaugrual Waging WAR for Literacy Conference for Teens (@WAR_for_Lit). Although filled with great anticipation, I must admit a mild growing sense of anxiety. Maybe that's too strong a word...unease, perhaps. A niggling of my inner organizer wondering if we're on track and what we need to do next to help this process smooth through the day.
Mental lists are made. Gentle reminders to colleagues of their jobs, like secure books for pre-sale, talk to business about sponsoring lunch and my own list to check back with potential donors as well as remember to apply for new grants.

This whole process has been a joy...until now. Now that the day is drifting closer, my mind works overtime trying to pinpoint areas we need to cover and wonder what we've missed or how badly we've missed it.
However, during this holiday season, I need to remember to give myself and my colleagues some slack. Let everyone relax and enjoy family time. Jan. 4 will come soon enough and then it's back to listening to that niggling voice.  To my coworkers on this project, enjoy the reprieve...Jan 4 is just around the corner and so am I; more work to do!
Seriously, though, we are a team. Everyone brings a different skill set to the table and for that, I am eternally grateful. Truly I am. You guys are the best. Even you, Lumberjack Man.
Posted by Eileen Zygarlicke at 7:25 AM No comments:

The news is out that No Child Left Behind has been axed by Congress and replaced by the Every Student Succeeds Act (ESSA). On one front this is welcome news. I'm not sure anyone involved in teaching kids ever thought we could achieve 100% proficiency in math and reading. Talk about pipe dreams...
However, I'm leery of the new legislation. Why? Because we've had "new" legislation for the last two decades and it always results in the same thing: changes to the curriculum/standards and benchmarks. What I'm reading is no exception. In my world the State Superintendent of Public Instruction remarked that we would "take a look at" the Common Core standards and probably make changes. These are the standards I've been laboring over for the last six-seven years. And not just me--my colleagues as well. We've worked during the summer to write common assessments based on these standards, written essential questions for our curriculum and spent tedious hours debating the nuances of the Common Core. And now there's twitterings of change?
With all this change after so much work, no wonder people avoid the education field like the plague. What other industry changes the standards or its work as often as education? What other field "doesn't require" its workers to put in extra hours after work to implement new standards but requires the new standards implemented. The only way that can happen is for teachers to put in the extra non-paid hours. 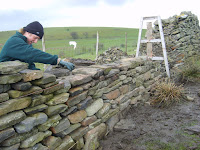 This may sound as though I'm anti-education, but I'm not. I am anti-bandwagon. Let's do what's best for kids. That may read strange to many, but seriously, let's put kids first. Is changing the standards, once again, best for kids? Is all the work we've done in the past several decades worthless? Frameworks? Standards? Benchmarks? Learning goals? I'm not against change, I'm against change for the sake of change. In my classes when I'm reworking what I teach I ask myself, "What's best for my students?" and try to go with that. Sometimes I wonder if that's a question ever considered by our public officials.
I don't know enough about ESSA to comment on it. What I am an expert on is kids. I've taught them for 25 years. Maybe the governing bodies should get input from veteran teachers on the  "new policies" being considered. Novel idea, I know. I guess I'm like Robert Frost in his poem, "Mending Wall:"


Before I built a wall I'd ask to know
What I was walling in or walling out,
And to whom I was like to give offense.
Something there is that doesn't love a wall
That wants it down. (36-40)


Before I built a wall I want to know what it is I'm guarding and what it is I'm repelling. Before I make sweeping educational changes, I want to know who's benefiting. Is this new legislation student-friendly? If so, sign me up.
But if the legislation is mired in legislation-ese, difficult to deconstruct and understand, and not student centered...well, it's the same merry-go-round just a different horse we're riding.
However, it's early and I really don't know much about ESSA. I'm willing to play wait and see. I just hope others put their masonry tools away until we give ESSA a chance. One thing I can say with certainty is that I'm glad to see No Child is left behind...for good.
Posted by Eileen Zygarlicke at 6:21 AM No comments: